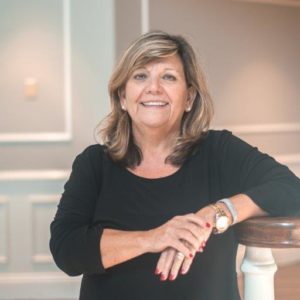 Sue has been with the Child Development Center since December 1972. She has served in several roles with the CDC beginning as a secretary. In 1976, she became Assistant Director, and in 1990, Director. Sue has been a member of Dauphin Way Baptist Church since she was an infant on the Cradle Roll. She is married to Larry Davison, and they have two daughters and a son-in-law, Sydney, Lara, and Tyler Loper.

Sue has served on the Board of the Gulf Coast Child Development Association and on their executive board in various other capacities.

“Taking care of God’s precious babies and showing them love and trust is very rewarding. It is one of the first steps in teaching them to trust in the Lord.” From infants to preschool, she believes we have the opportunity to share with them about God’s world and His love. It is very special knowing that the CDC had a part in planting the seed that could change their lives.

Train up a child in the way he should go: and when he is old, he will not depart from it. Proverbs 22:6